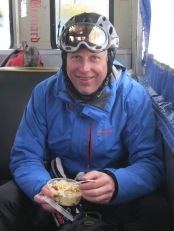 Ross was one of the co-founders of Power4Flight, a joint venture between Currawong Engineering, Cobra-Aero, FivebyFive Development and Syncline Systems.  Power4Flight was formed to address the powertrain reliability, durability and affordability issues that have been the achilles’ heal of every aircraft program since the advent of Small Unmanned Aircraft System (SUAS). The Power4Flight team is focused on providing complete powertrain solutions, including integrated starter/generator, Electronic Fuel Injection (EFI) and power conditioning electronics.

Ross co-founded Cloud Cap with Bill Vaglienti with the idea of developing a highly integrated and end user programmable autopilot/flight management system for small UAS integrators. Rather than competing head to head with all the emerging airframe integrators with a UAS of their own, as they had done previously at Insitu, they focused on developing key system components and subsystems that all competing integrators would require.

This narrow developmental focus and broader market approach led to the introduction in 2002 of the Piccolo autopilot.  Piccolo’s popularity quickly grew, subsequently capturing much of the emerging off the shelf small UAS autopilot market. Follow on products included the Piccolo Plus, Piccolo II and Piccolo SL and Piccolo OEM.

Piccolo autopilots have flown on over 40 different airframes, in almost every conceivable flight configuration and have logged close to a 150,000 hours in Theater on multiple UAS platforms including the AAI Aerosonde, AFRL Silver Fox and NAVIR Tiger Shark. As of 2014 almost 4,000 units have been produced and shipped. The capability includes both fixed and rotary wing as well as a host of other non-traditional applications including aerostats, boats, quad copters, blimps and hybrid quad rotors.

In 2005 the opportunity presented itself to tackle the next challenge facing UAS developers; small inertially stabilized camera gimbals or payloads as they are typically called. Out of that opportunity and in partnership with Currawong Engineering the TASE gimbal was born.  The market was hungry for a small, reliable and highly integrated off the shelf gimbaled camera solution for small UAS Intelligence, Surveillance and Reconnaissance (ISR) applications and the TASE filled that niche.  Follow on products included the TASE 100, TASE 200, TASE 300and TASE 400.

The autopilot and payload business continued to grow under Ross and Bill’s leadership until 1999 when they sold the company to the Goodrich Corporation (later purchased by United Technology).  Both Ross and Bill stayed on to facilitate the transition and both remained active in the company until their departures at the end of 2012.

While at Cloud Cap Ross was responsible for the initial design and development of the Piccolo autopilot, TASE electronics, the Crista IMU, the GCS electronics, an integrated power conditioning system and a host of other accessories. In addition to his technical contributions he participated in all early flight testing, developed key customer relationships, managed Cloud Cap’s manufacturing and led the early business development efforts. As the company expanded Ross moved into the CEO/COO role and was responsible for day-to-day operations and key customer relationships.

Together Ross and Bill built an organization known for producing innovative, cost effective and reliable products. More importantly, they developed a culture that valued and empowered the employees, making Cloud Cap a great place to work!

Ross was part of the small team led by Tad McGeer that developed the original Aerosonde UAV. The Aerosonde was developed as a long range/long endurance UAV platform for use in atmospheric science and routine meteorological observation applications. The target mission was the collection of pressure, temperature, humidity and wind data for injection into existing models to help improve weather forecasting in general, and in particular tropical cyclone and hurricane landfall estimates.

Ross was involved with the design and development of the avionics, ground station and sensor electronics for the system. During his Insitu years, Ross was involved with numerous UAV missions and science experiments around the world including the first Atlantic crossing by a UAV in Aug of 1998. The historic 3,270 km, 26 hr 45 min flight between Bell Island Newfoundland and South Uist Island off the coast of Scotland on 4 kg of fuel was the culminating event of Aerosonde development at Insitu.

Before leaving Insitu to co-found Cloud Cap with Bill Vaglienti, Ross was part of the proof of concept and initial prototype phases of the Scan Eagle UAS and Skyhook capture system.

This was his first job in a start up and a great learning experience. The Transponder Landing Systems (TLS) was basically a crude inverse GPS system (the satellites were on the ground). It was intended to augment or replace traditional fix field Instrument Landing Systems (ILS), typical at many airports. While a good idea at the time, modern day GPS Guidance and Navigation systems almost instantly obsoleted the concept. Ross was a senior Electrical Design Engineer working on the high-speed time of arrival electronics in the ground based sensor array.

Ross’s first job out of University and where he learned the basics of analog and mixed signal circuit design working on bench top test and measurement equipment (Oscilloscopes and Pulse Generators). He also learned PCB design, PCB process and manufacturing test.

Ross spent his years before and during college working in the Rocky Mountains on helicopter-portable Seismic Exploration crews looking for oil and gas deposits. It was in this job he developed his passion for electronics and love of aviation.